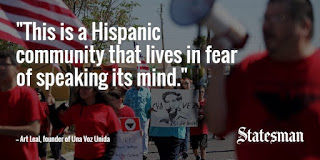 On the surface, Odessa and surrounding Ector County would seem to be fertile ground for Hispanic political activity. It has a surging Hispanic population, which now makes up 58 percent of the county. The region boasts a long history of voting and civil rights activism going back to the 1970s and 1980s. While studies link low levels of voter turnout to lower income levels, the median income among Hispanics in Ector County is 27 percent higher than the state average.

So promising are the demographics in the Permian Basin that Democratic lawmakers pushed for the creation of a “Hispanic opportunity” congressional district including Odessa and Midland in the most recent congressional redistricting fight. The measure failed to make the final map, but state leaders took notice of the region’s growing Latino community and its potential influence.

Continue Reading at the following link:

http://projects.statesman.com/news/latino-representation/odessa.html
Posted by Administrator at 10:24 PM