Art Leal and PTS: I shall fear no Evil 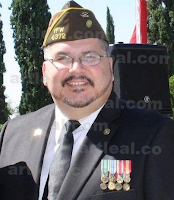 On January 8, 2016 the discredited milblog site, thisainthell.us, posted an inflammatory article directed at me regarding an interview I gave KMID.TV regarding a "leave behind card" for businesses that I would "potentially frequent" and who allowed open carry.  The card  makes reference to a few of key points.


Lastly, it states that I will never be back.

Immediately after release, the above reference milblog site was tipped off and in a "shoot first, ask questions later" fashion, shot off an article immediately suggesting that it was politically motivated because I was a Democrat.

It says that Art is a combat veteran who suffers from PTS and that he won’t be back to the business to spend his pennies because the sight of a gun triggers his PTS. I’m sure that the business owners are relieved that he won’t be back in Art Leal’s case. See Art is a Democrat politician who clearly has an agenda – to pander to the anti-gun nuts. I’m guessing that there are a few of those in Texas.


The above was the first assertion.  But this wasn't enough.  Secondly, the author wanted to cast question into my service record, so suggesting a FOIA was all it would take for bloggers to take the bait and like the followers they are immediately begin a campaign to besmirch my character and service.  Some of the bloggers were even calling it a "call for fire order" and called for the immediate attack on my social networks. (I have a words for that: Keyboard Warriors) It was shared on several similar groups and blogs.  The milblogger bullies even went so far as attacking the local DAV Chapter, the local VFW post, the Permian Basin Marines, and a past nonprofit group that I served as a board member.  This kind of unbecoming conduct I would never expect of a respectable Veteran with professional decorum or a site that dedicates itself to Veterans.  The site may have started with good intentions as project to expose Stolen Valor but has become more a hate hub.  The site discredits itself all on its own.  But I digress.

The article itself is really just a bully's rant. He goes on:


It seems to me that Leal is just being a Drama Queen. Yes, he’s a combat veteran, in a very remote sense, but using that for his own political purposes doesn’t help the rest of us when he uses it to be a big crybaby. These guys are as bad as vegans who use their dietary choices as the first topic of conversations with new acquaintances. I’m not a big advocate of “open carry”, but bed-wetting Art Leal and his phony microagression doesn’t do anything useful for anyone except advance his own name-recognition and not in a good way.

He continues to stir his followers arousal by posting a few screenshots; me holding a long rifle at a Medal of Honor dedication ceremony, me participating a the Annual Cesar Chavez March wearing a Brown Beret, and an screenshot of a post where I metaphorically told a "War Story" about a memory I had after viewing a newsfeed post on facebook.  All this was served perfectly to a slew of likeminded milbloggers.

I would have liked to have seen some of the comments be more civil and have had a decent adult interaction, but sadly, all of them were derogatory in nature and were picked up as SPAM by my facebook settings.  And yes, all of them were banned from sending further communication to my Facebook page.  But, it didn't stop many of them,  I have always kept my email and cell number public so I had plenty of email and text messages.  Here is the thing, I don't directly respond to bullies.

So the truth is that I support 2nd Amendment rights and I support concealed carry.  This was emphasized at the end of the story.  I am not afraid/scared of guns.  I wasn't speaking for all veterans.  I wear my Veteran caps to represent that I personally am a Veteran.  The story did not say I was representing the DAV.  I was representing myself and anyone, Veteran or Civilian, who may feel stressed by an unknown carrying a gun.  And by their request, I am a verified war veteran by the country's largest Veteran Organization. I should mention that based on the comments and messages I received, I would definitely be worried about some of these bully milbloggers carrying a weapon.

So what became of it all?  Since January 1st, when Open Carry became law in Texas; It would seem that many licensed CHL holders who would have celebrated and began open carrying their hearts out.  But what seems to be trending is that many business establishment have on their own banned open carry.  I have yet to pass out one card.  Was it a waste of $13.99?  I think not.  Backlash or not, a message was shared that not everyone is okay with Open Carry.  And as far as PTSD? PTSD is real.  Not all individuals with PTSD are the same.  Considerations should be given to any individual who has PTSD, even more so if they are a Veteran.  I am not an expert on PTSD.  I can only speak for my own personal experiences. So for whatever reason businesses are choosing to place 30.06, 30.07 or both signs on their businesses...Thank you.  I appreciate your efforts toward a safe atmosphere in your establishment for your patrons.

I came across this video and I have to share it here.  Not just because the site and the milbloggers he is addressing are the same individuals that questioned my service because they didn't agree with me politically but because it is the truth.  Calling out legit guys doesn't do the cause well, and makes you look bad.  Enjoy the video.

Posted by Administrator at 7:21 PM